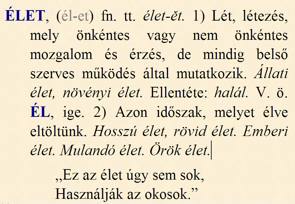 An ideal dictionary contains ideal entries. An ideal entry is a complete set of definitions and information about a word, contained by a dictionary or encyclopedia. From these, one can understand the meanings, usage, forms and every data of a word. The task of an entry is to help to understand a word or context, what was not understood by the reader before. Therefore we also suppose that the reader of the entry is confused to a smaller or greater degree, so we must make him understand the explained word in the simplest possible way, activating the existing knowledge and experiences of the reader from other fields. It is possible gradually only.

The entries consist of the following parts in this dictionary, due to the gradients of understanding:

Entry word, form variations, irregular conjugated forms (plus the part of speech). The reader knows from this, whether he reads the right word or not.

The different background colors support differentiation, separation of the meanings of different parts of speech.

Illustration
The first gradient of understanding is recalling a similar memory. The most applicable means for this is a picture, drawing or similar figure, what illustrates the general concept of the entry word. (If the entry word was "chair" for example, then the illustration would be a simple drawing of a chair.)

Definition:
Describing category: When the reader has some clue about what is discussed then he is able to think in categories. Therefore the following stage is a category. It is a substitutive definition, what fits into the sentence instead of the entry word. It is not a synonym, but a specified exact category. (In case of "chair" it would be "sitting furniture".)
We highlight the words of the describing category within the definition by bold characters so this part is the most apparent for the first look. (It is also useful when the reader tries to find the right one from several definitions.)

Descriptive (form) definition: This is also an integral part of the actual definition, not a separate meaning. It describes forms, characteristics, non-characteristics of the concept, and it shows comparisons to and differences from other similar things.

Derivation of the word:
The derivation gives further information about the development of meaning of the entry word: how this word or its different variants were used long times ago in the same language or in different languages. Additionally, other similar but different variants (sometimes from other languages) are listed with their meanings, in reverse chronological order (from present to past forms). It helps in full understanding of the concept of the word. Uniform structure of the derivation is as follows:

Notes on usage: Application of the words do not always follow a uniform logic. The "Notes on usage" help to understand such differences, similarities, referring to other words, with links to them. It is useful to write enough examples in the description that are absolutely necessary for good understanding and application.

Further details: It is a more thorough analysis of the meanings of a word (to scientific depths). It contains the different shades of a word of many meanings, important further information, which might help in more thorough understanding and application of the word.
If a word is detailed by the "Further details" then the first definition of the word is always a general definition. The Further details are below, separately (after the Derivation). So a beginner student, or one learning Hungarian language does not have to clear each definition from this big dictionary, but it is enough for him to understand that certain definition what he was looking for, plus the first general definition, as if he looked it up in a simple dictionary.

Grammar data: Grammar data are usually not important for an average reader; therefore usually we show them hidden under a sub-chapter title. The hidden part can be opened by a mouse-click. It contains:
Hyphenation, abbreviation and pronunciation of the word (Hungarian pronunciation is seldom different form the written form)
Synonyms and antonyms
Proverbs, phrases, locutions (including their meanings)
Frequency of usage, statistics and other data

The definitions shall not contain unnecessary abbreviations. These only make reading harder for the reader and save neither time, nor space. Additionally, a web-based dictionary does not have space limitations as the old paper dictionaries had.

The definitions shall not contain unspecified generalities. Such generalities are "something", "someone", "anything" or "anyone", etc. These words only tell the reader whether you mean a person or a thing. It is always possible to specify a more narrow category instead of such generality.
It is hard to understand the definition for example if it states only such generality about a job as "makes something". Specify whether the defined job "makes food", "makes paintings", "makes metal products" etc.

The definitions and illustrative sentences shall contain only generally known words so the readers do not have to clear unnecessarily many more new words.

The definitions and illustrative sentences shall apply generally accepted grammar and word usage, clear and not too complicated sentence structures.

The illustrative sentences are used to make the reader recall cases when he heard the word in this meaning, and to show how it is usually used (if he has never heard it before). Therefore they shall refer to memories when this word is typically used. The illustrative sentence is a complete sentence, so it must contain minimum the subject and the verb. (Hungarian often uses incomplete sentences.) If any one of these is omitted, or is not typical then the sentence does not help enough in understanding the entry word.

For example, if we intend to illustrate the meaning of "cook" verb, then two good illustrative sentences would be these: The cook cooks soup. It always smells good when my mother cooks the dinner. In these sentences, the subject typically performs the activity expressed by the word.

Such illustrative sentences would not help in recalling related memories: He cooks. Susan cooks. Somebody cooks. I can't cook. The activity is not typical of the subject in these cases – actually the reader doesn’t even know who it is.

In case of definition of a noun, the sentence shall contain a verb what is typically used with that noun. For example, if we intend to illustrate the meanings of "hammer" noun, then two good illustrative sentences would be these: The smith flattens iron by a hammer. The hammer hits the nail easily in the wall. In these sentences the verb is typical to the noun.

Such illustrative sentences would not help in recalling related memories: I lost my hammer. Where is the hammer? The verb does not characterize the noun in these.

Therefore we must find such illustrative sentences that help to easily recall the concept expressed by the word.

When a student tries to understand a new word and tells sentences himself then first he copies these illustrative sentences, then he automatically recalls such phrases or expressions where he heard that word from others in many cases. Finally he reaches a level where he can use the word freely – this is when he fully understands it.

We must also pay attention to use the word as the specified part of speech, not some other form. For example this illustrative sentence would not be correct for "cook" (verb): Cooking is a task of the maid. ("Cooking" here is not the verb what was defined by the definition – it is a noun.)

This structure, dictionary-writing technology and set of aspects are copyrighted intellectual property of the authors of WikiSzótár.hu. © WikiSzótár.hu 2008